10 Must-Try Kebabs when you visit Turkey

Visitors to Turkey are often surprised that kebabs are generally not served wrapped in bread and with cheese and a range of sauces as they often are in Western countries.  They are also surprised at the range of kebabs available. Each region in Turkey will generally have their signature kebab, and so there are many to try.  Here’s my personal recommendations for the 10 Must-Try kebabs when you visit Turkey.  Happy eating! 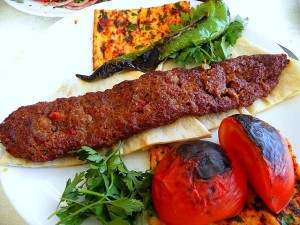 Named after Adana, Turkey’s fifth largest city, Adana Kebabs are made from spicy, hand-minced meat and grilled on an iron skewer on a barbeque over charcoal.  During the cooking process the skewers are frequently turned, and the melting fat is collected by pressing pieces of flatbread against the meat as it cooks.  The flatbread is served with the kebab along with green peppers, onions, parsley and sumac.

The Urfa kebab is very similar to the Adana kebab, however it is not spicy.

Known all over the world, the doner kebab is cooked on a vertical rotisserie, and the meat is either marinated lamb, beef or chicken.  The meat is shaved off the rotisserie, and is generally served in flatbread or as a sandwich and is a favourite snack for Turkish people on the go.  It will usually be served with tomato, onion, sumac and pickles. In the Turkish language, the word “döner” means to turn or rotate, hence the name. 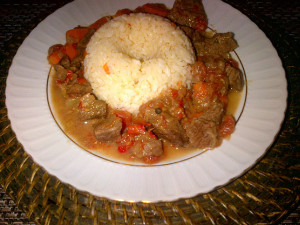 This kebab comes from the Anatolian part of Turkey and was a favourite in Ottoman times.  It is different to many other kebabs in that it is actually a stew made from juicy lamb’s meat, although sometimes you will find a beef version.  The cubes of meat are marinated in milk, rosemary and onion then cooked with lots of different types of spices such as bay leaves, cinnamon, oregano, parsley and cloves, tomatoes, onions, garlic, sugar and white wine.  It is generally served on a plate with white rice or pureed potatoes.

Originating from Central Anatolia and the Western Black Sea Region this delectable kebab is cooked in a clay pot with onions, tomatoes, potatoes, cumin, pepper and lots of butter.  It was originally made out of diced goat meat, although these days you will find lamb, beef and chicken versions available.  Flour and water are added to thicken it.  While you will find the testi kebab on the menu of many restaurants in tourist areas, this is not the original testi kebab.  A “real” testi kebab takes 3-4 hours to cook, and you will usually need to book it hours ahead of time so that it is ready for when you arrive at the restaurant. 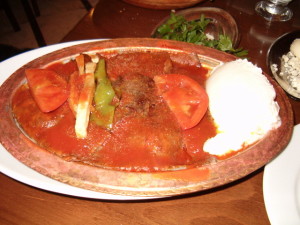 The Iskender Kebab is known as the king of the kebabs, and come from Bursa.  It’s a rich treat, and a well cooked Iskender kebab won’t be forgotten in a hurry.  First warmed up pide bread is placed on the plate and drizzled with hot butter then covered with super thin slices of beef covered in a tomato sauce then topped with spicy melted butter and possible some fat from the meat.  Yoghurt is served on the side of the plate. The lambs used for this kebab are specially bred for the purpose and fed with herbs on Mount Uludağ near Bursa. 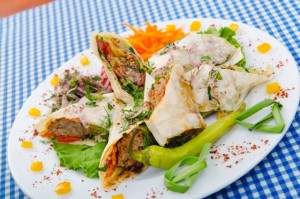 This lovely twist on the skewered kebab is a must-taste for any visitor to Turkey.  Minced meat seasoned with coriander, cumin, black pepper, salt, chilli flakes and parsely is cooked on a skewer.  Once it is cooked it is wrapped in a thin lavash bread and cut into size pieces. Often topped with tomato sauce and served with a side of fresh yoghurt.  The Beyti is a new kid on the block, having been first created in 1961 by Istanbul restaurant owner Beyti Güler following a visit to Switzerland where he was inspired by a famous Swiss butcher’s method of preparing meat.  Güler certainly knows what he is doing when it comes to serving up kebabs – his restaurant, Beyti was chosen to serve former US President Richard Nixon on board Air Force One on a trip to Europe.

The Turkish word ‘kuyu’ translates to ‘pit’ or ‘well’ in English.  The kuyu kebab is so named because it is cooked in a pit of fire.  Hailing from the Black Sea region, there are some regional variations of the name – in Kastamonu’s Taşköprü they call it ‘perive’, while in Siirt they call their version of it a ‘Büryan kebabı’. The secret to this kebab is that is made from the meat of lambs that have been specially raised for the purpose, grazing in the mountains.  During the cooking process evergreen branches are put into the pit caused them to smoke, and infusing the meat with a wonderful smoky flavour. Once cooked the kuyu kebab’s meat is so tender it almost melts in your mouth.  It is usually served with rice or pide bread. 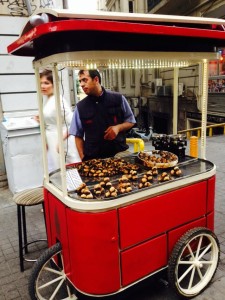 Ok, this is not a kebab as you know it, but it is worthy of a mention.  The kestane kebab is actually roasted chestnuts, and referred to as kebabs by locals because they are slowly roasted in the same way as meat.    As you walk around Istanbul in winter you are likely to smell the smoke from the kestane kebab street carts before you see them.  The street vendors put a small piercing in the chestnuts to stop them exploding during the cooking process, then they are put on the grill which sits over a small fire and lovingly roasted by the street vendors. Chestnuts originally came from Sardis (around 70km from Izmir in Turkey) and were originally called the “Sardian nut”.  In ancient times, prior to easy access to wheat flour and potatoes chestnuts were a staple form of carbohydrates in Turkey.  These days they are a favourite snack for locals, especially in winter.

This is another form of rotating kebab that comes from the Erzurum province.  Unlike the doner kebab which rotates vertically, the Cağ kebab is rotated horizontally over a wood fire.  The secret to this kebab is the marinating process. Lamb, copious amounts of tail fat, spices and yoghurt are marinated for a full day before cooking.  It is only made from lamb, and is served on skewers with strips of very thin flat bread.  The result is a simple but incredible taste sensation and well worth a try when you visit Turkey.