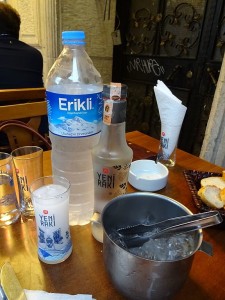 1.  Raki – Ask most Turkish people what the national alcoholic drink of Turkey is and most will tell you it is Raki.   It is an aniseed-flavoured distilled alcoholic drink made from grapes, figs and plums. Thought to have been in existence for around 300 years, its origins are not clear.  One theory is that it was originally called Iraki (which means from Iraq) as it was first made here.  Another theory is that it takes its names from the razaki grapes that are used to make it.  The third, equally plausible theory is that it comes from the Arabic work “araki” which means that which makes one sweat (and yes, raki can help you work up a sweat).

Today, raki has many rituals surrounding it, and those who are really serious about their raki will tell you that it is a culture, not a drink.  The key to raki is what you eat with it.  This is a drink that should not be drunk at a bar as you would a scotch or a vodka.  It should be drunk accompanied by meze – the staple of which is white cheese.  Another favourite is melon. In coastal areas, it is a very special thing to go out for a fish dinner and drink raki – it is commonly drunk when spending time relaxing with friends.

It is best drunk with water added to it (icecubes are optional), with a second glass of water to accompany it.  When water is added to raki it turns it a milky white colour. 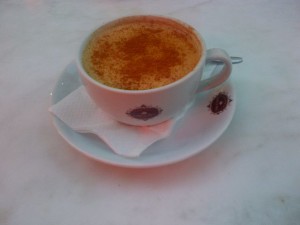 2.  Sahlep – traditionally a winter drink, sahlep is particularly fascinating because it is made from orchids… Dating back to the 8th Century, when Islam became the prevailing religion in Turkey, this delicious hot milky drink was developed as a non-alcoholic winter warmer.  The base of the drink is a flour made from wild orchid tubers, and which contains ingredients which have been proven to be of benefit for people which bronchial problems and stomach upsets. Sahlep is becoming increasingly precious because some of the orchid varieties that are used to make it are facing extinction – it takes more than 1000 orchid tubers to make just 1 kilo of sahlep flour, and around 7 years for the orchids to grow to a stage where they can be used for this purpose. So there it is difficult for supply to keep up with demand.  It is served with cinnamon sprinkled on top, and can be found being served from street carts, particularly in Istanbul and small cafes. 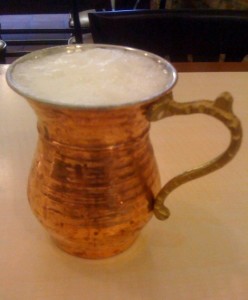 3.  Ayran – a cousin of the Indian drink Lassi, and the Iranian drink doogh, and undoubtedly Turkey’s national non-alcoholic drink, ayran is a salty yoghurt drink which is served cold.  Made with just yoghurt, water and rock salt, it is often served as an accompaniment to meat dishes and lahmacun, particularly in summer.  The tradition of drinking it when eating meat possibly began as a means of counteracting any possibly stomach upsets as a result of eating meat in summer months.  Today, it is so popular that it ubiquitous – it is even served in McDonalds and Burger King in Turkey.  Although it is available from small corner shops and super markets in small take away containers or in 1 litre plastic bottles, many restaurants (especially kebab restaurants) will serve home made ayran which is much frothier than its ready-made version. 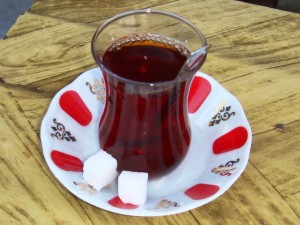 4.  Çay – (Chai) – Turkish black tea is as essential to Turkish daily life as breathing.  It is impossible to even contemplate breakfast, a social gathering, a meeting, or in Istanbul, a ferry ride, without a glass of the red coloured Turkish tea in hand.  Look around you as you walk through any bazaar or the pedestrian shopping area in any town and you will see tiny hole in the wall tea stops which serve tea to the local businesses, and harried looking young boys power walking down the street with a tray of tea in small tulip-shaped tea glasses on his way to deliver to customers. As you walk through the streets in most towns in the morning, it is highly likely you will hear the tinkle tinkle tinkle sound of sugar cubes being furiously stirred into a glass of tea by local shopkeepers.

Funnily enough, although tea is firmly ingrained in daily life today, it didn’t actually become popular until the late 1870’s when the then governor of Adana in Turkey’s south east published a pamphlet promoting its health benefits. Tea houses sprang up everywhere, and the fact that it was cheaper than coffee probably helped to seal its popularity. The per capita rate of consumption is 1000 glasses per year.  It is made using using a double tea pot.  First, water in the lower pot is boiled, then loose-leaf tea is steeped in the top pot which is smaller.  It is then served by pouring tea from the top pot into the tea glass, and diluted according to personal taste using water from the bottom pot. Two important words to remember when ordering tea – “Açık” (Ah-chik) which means weak or “light” tea, and “demli” which means strong.  Throughout the country, cities, towns and villages have tea houses which are usually a men-only affair and tea gardens, which are generally a family affair. Try and join the locals in one of these establishments to get the full Turkish tea experience when you visit Turkey. 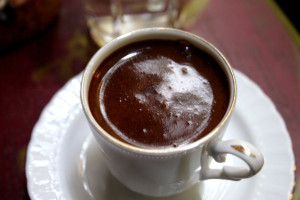 5.  Turkish Coffee –    the tradition of Turkish coffee is believed to date back to 1555 when it was introduced to the palace in Istanbul by Ozdemir Pasha, the Ottoman Governor of Yemen.  He had grown to live it while stationed in Yemen.  Over time, the Ottoman palace refined the method of its preparation, and even created a job in the palace of Chief Coffee Maker.  Today it is cooked using finely round coffee cooked in a pot with sugar according to taste, then served in a small cup where the grounds are allowed to settle.  Turkish coffee is an important part of social gatherings and even plays a part in traditions such as engagement.  You can’t add sugar to Turkish coffee after it has been made, so there are four important words you need to know when ordering a cup of Turkish coffee – “sade” (sah-deh) – this means you want your coffee without sugar, “az sekerli” (Ahz-sheh-ker-LI) – with a little sugar, “orta” – this means “middle” and says you want a medium amount of sugar, or “şekerli” (sheh-ker-LI) – which means with sugar, and so you want a lot of sugar.

Enjoy tasting these drinks when you visit Turkey!