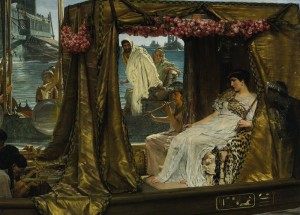 As you walk through Ephesus, you are walking in the footsteps of some of history’s greatest characters – Alexander the Great walked these streets as did St Paul and St John and Cleopatra and Mark Anthony. That’s right, the most famous lovers in history walked here.

But first, a quick refresher – Cleopatra was the Queen of Egypt from 47-30BC, and Mark Antony was a powerful Roman general.  Cleopatra was born in Alexandria, Egypt, to a powerful family of Greek origin.  She initially ruled Egypt with her father, and later became its sole ruler.  She didn’t meet Mark Antony right away – first she formed a political alliance with Roman General Julius Caesar, and later became his mistress and had a son with him. Because Caesar was already married, Egyptian custom dictated that she marry her brother, which she did, although later dispatched with him to protect her son’s right to succeed her.

Meanwhile, Mark Antony was an ally of Caesar, and married to Fulvia, a widow of a close friend of his.  After Julius Caesar was assassinated, Mark Antony became one of three men to rule Rome.  It was in this role that he met Cleopatra, having called her to meet with him in Tarsus, in Turkey, to seek her political support to make sure that Egypt was loyal to Rome.  During the course of this, they began a relationship and moved back to Egypt, and over the next 14 years, although married to other people, they married and had a twin boy and girl, and then later another son together.

At one point, the tale of the exotic and mysterious Egyptian Queen and her powerful Roman General moved to Ephesus.  Mark Antony had come here and had been welcomed by the Ephesians as Dionysus incarnate. He arranged for the Ephesians to give Cleopatra  a greeting worthy of a royal mistress on her arrival. So as you walk alon Harbour Street in Ephesus, imagine Cleopatra walking up here from the port to a rousing welcome.  And as you walk along Arcadian Street in Ephesus, think also of Cleopatra, who apparently loved the high-quality shops that lined this street.

Cleopatra came here to accompany Mark Antony as he put together a navy, with which he planned to attack Rome. Cleopatra was one of the biggest financiers of this effort, providing both ships and money, and in 32BC, they set sail with a fleet of 500 ships on their way to attack Rome.