Gozleme and the flatbread family 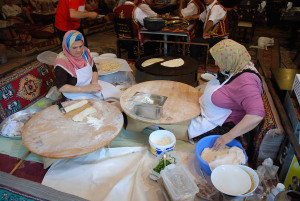 You’ll see them all over Turkey – women sitting cross-legged on cushions with a low, small, round wooden table covered in flour, expertly kneading out dough until it forms a paper-thin circle.  Thwack, thwack go their long, thin wooden rolling pins as they deftly coax the dough into shape.  These ladies are generally making gözleme, which is a traditional Turkish flatbread snack. It’s the snack of champions and a simple but tasty treat.

After the dough has been kneaded into shape, next comes the filling which is usually savoury – for example, spinach and fetta cheese, mince, lightly spiced potatoes or yellow cheese. Finally, it is lightly brushed with butter and eggs and then cooked over a large convex griddle called a saç (sach), preferably on a wood fire.

Gözleme gets its name from the Turkish word “göz” which means “compartment”.  This refers to the pocket made from the dough in which the fillings are placed and cooked.  It is a traditional village food made by women, particularly in the Central Anatolia area, for centuries, however these days you will find gözleme kiosks and restaurants verywhere – particularly on the side of highways, inviting travellers to stop in for a snack and a rest.  It tastes best warm, served with the traditional yoghurt drink of ayran or a nice fresh glass of çay (Turkish black tea) but they taste fine cool as well.

Gözleme is part of the family of flat breads – the technique and type of dough used to make the gözleme is the same as that used to make plain flat bread (lavash), and the same dough has some yeast added to it to make its cousin bazlama which is a smaller, leavened version of bread also cooked on the hot plate. It’s all about the hot plate people. 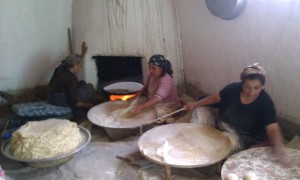 Often women in villages will get together at the home of someone who has a wood fire oven and make a large supply of the base flatbread for their families – enough to last them several months.  After cooking it is then left to dry – when it comes time to eat it, they will simply sprinkle some water over it to soften it. It is covered with a cotton cloth and rested for about 10 minutes before it is served.  The bread in this form is called “yufka”.  What is remarkable about it is that no preservatives are used to make it – the yufka is simply stored in a dry, cool place until it is time to use. 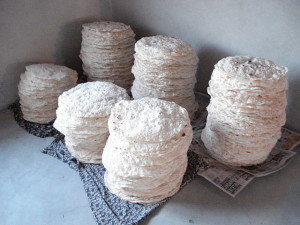 Yufka is kind of like the “mother” of Turkish bread – and dates back to the days when Turkish people were nomads and moved across central Anatolia with their herds of animals.  Back in those days yufka was most likely cooked on a heated stone.  As the nomads eventually started to settle, most homes or at least villages, would have a wood fired oven, and it was from the first glowing embers after the fire was lit that the unleavened bread would be made.  This is a tradition that continues today.

Yufka is the base for many Turkish dishes – for example, borek (thin layers of dough wrapped around their fillings), a raised bread called pide bread, the aforementioned bazlama and lahmacun.  It’s important to note that lahmacun is also part of the family of tasty flat bread delicacies – it is often referred to as “Turkish pizza”, but this is not true.  It’s a flat bread topped with finely minced lamb, without cheese then heated in a wood fired oven.

So simple, so tasty and so versatile – here’s to the humble flat bread.