It’s hard to visit the Ephesus area without being asked to buy a leather jacket or to visit a leather manufacturer, and as you walk the streets of Kusadasi, it is nearly impossible not to catch a waft of leather as you walk around the shopping district.  But rather than these businesses simply conveniently springing up as another means to help you spend your holiday dollars, there is good reason for the proliferation of leather shops here – this region is at the heart of one of Turkey’s 13 official leather manufacture industrial zones and has a history of leather manufacture dating back to ancient times.

The history of leather is as old as the history of man.  The earliest civilizations used it to protect their body hands and feet, and also used it to make tents.  This is confirmed by the discovery of cave paintings near Lerida in Spain dating back to the Palaeolithic period, depicting the use of leather clothes and backed up by the discovery of tools used for scraping hides in various palaeolithic sites.  We know that the ancient Egyptians were also adept with leather – paintings and artefacts in Egyptian tombs show us that ancient Egyptians used leather for sandals, clothes, gloves, buckets, bottles, shrouds and military equipment. 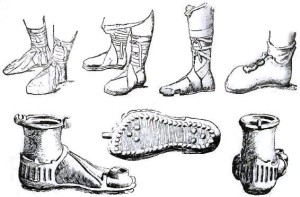 In ancient Rome, the preferred type of skin for making leather was cattle, pig or sheepskin. The families of Roman soldiers used it to make heavy coats to protect their loved ones from the elements whilst travelling. Leather was also used to make the famous Roman sandals, boots and belts.  In Roman times, different types of sandals were worn by different classes of people.  There were also specific types of sandals worn indoors and at ceremonies such as banquets.  The cheapest leather was used to make the sandals of slaves and labourers. Women’s sandals would often be decorated with elaborate embroidery and gold.

Leather is made from animal skin using the process of tanning, and the ancient Romans were expert at this, even figuring out how to dye leather red.  Because the process of colouring the leather took longer and was more expensive, it was generally only wealthy Romans who could afford to wear red sandals and boots, and so this was an indicator of social class and wealth.

The ancient city of Pergamon had a thriving leather parchment production trade, said to have been developed in response to the increasing costs of papyrus production. The word parchment comes from the early name ‘pergament’ which came from the name of this ancient city.  Some believe that parchment was invented in Pergamon, whilst others believe that it was invented in Egypt but improved significantly in Pergamon over the years after Egypt refused to export any more papyrus to the city.  Parchment was used for books and documents and was embraced as it was more hardy than the brittle papyrus.

Turkey has long established traditions of leather manufacture, dating back to the days when Ephesus was a thriving city and had a significant leather trade.  In years gone by, it was manufactured by craftsmen, with the tradition passing from father to son.  Today, it is a sophisticated industry, with over 13 leather industrial zones around Turkey, the earliest of which was located in Istanbul, just outside the old city walls around 1453.  This site was moved to the modern day city of Tuzla, just outside Istanbul, less than 20 years ago, and is the biggest leather industrial zone in Europe, and one of the most advanced, employing ecologically sound practices. 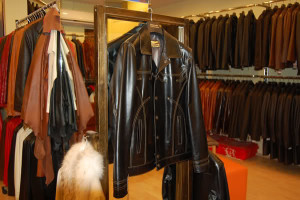 The leather trade is big business in Turkey – the value of leather exported by Turkey sits at more than $1.5Billion USD each year, and it is now the second biggest producer of leather goods in Europe, after Italy, and fourth in the world after Italy, China and India. Turkish leather exports comprise footwear (31%), double facing garments (19%), leather garments (16%), leather goods (16%) and raw hides and finished leather (16%). Turkey exports its leather goods to over 100 countries, however the main markets that Turkey exports to are Russia, Italy, Germany, France and the UK – comprising over 50% of exports.  Turkey can produce its leather goods cheaper than its European cousins, one of the reasons that each year it is steadily moving up the ranks in the global leather industry.

The last decade has seen the Turkish leather industry skyrocket because of its low manufacturing costs, modern production methods and its ability to manufacture in compliance with environmentally friendly practices.  It has steadily gained prominence globally as some European countries such as Italy and Spain have scaled back their operations because of the high costs in conforming to environmentally friendly practices. The Turkish leather sector invests heavily in research and development and also has a significant market for exporting its leather manufacturing technology.

So, if you do get a chance to visit a leather shop while you are in the area, you may be pleasantly surprised by prices and quality.  If you visit a bigger leather shop (they usually have a factory somewhere in the area), you will generally have to sit through a short “fashion show”, but if you get into the spirit of things, and appreciate the pride that is behind it, you will probably find your visit a whole lot of fun.  As with anywhere in the world, you should keep a keen eye out on issues of quality and be aware of imitation products, and if you are thinking of buying a more expensive item, such as a jacket, ask your guide for their recommendations of where to go.