It’s nearly time for Ramadan, or Ramazan, as it is known in Turkish. This year it will run from 18 June until 16 July.  The date of Ramazan is earlier by approximately 11 days each year because its date is based on the lunar calendar. When Ramazan is over it will be followed by Şeker Bayram (Sugar Festival) from 16 – 19 July.

Every year during Ramazan we meet travellers who are astonished that they can easily eat and drink, as they had hesitated in booking their trip to Turkey, believing that these things would be difficult.  So, if you are thinking of putting off a visit to Turkey because of Ramazan, there is no need to worry about this – Ramadan in Turkey is actually a really fun time to travel providing you have booked your travel in advance, but more about that in a moment.

So what’s it all about? During the month of Ramazan, those of us who are fasting, cannot eat, drink (not even water) or smoke between sunrise and sunset.   The idea of the fast is to teach patience, discipline, sacrifice and empathy for those who may not have enough to eat.  It is also designed to cleanse the body, mind and soul.  Ramazan is also a time for doing good deeds and for being generous to others. Some people are exempt from fasting – these include young children, the elderly, women who are pregnant and those with certain medical conditions.

People who are fasting for Ramazan will get up before sunrise for a small meal called sahur – this must be eaten before sunrise, and is important to a successful fast.  In times gone by there would be drummers moving through the streets of villages and cities to wake people up for sahur.  Sadly, today this does not occur as often, but you may be lucky enough to hear the drummers somewhere along your way.  It really adds to the special feeling in the air during Ramazan. 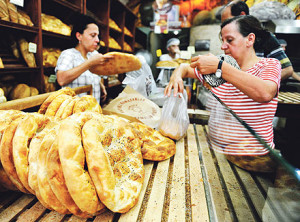 As the call to prayer marking sunset is heard, those who are fasting will break their fast, often with something simple such as a few dates, and then everyone gets together to share iftar, the meal that breaks the fast.  During Ramazan, bakeries are pushed to keep up with the supply of “Ramazan Pide” which is a special kind of bread eaten during iftar.  Interestingly, this is the same bread which is sold as “Turkish Bread” in many European countries.

Iftar meals are special – not just because it is a chance to finally eat after a long day fasting, but because families will make an extra effort to share meals together, especially with extended family. Businesses will quite often host a special iftar meal for their staff during Ramazan – quite often out at a restaurant that provides special iftar menus.  And it is common for local municipalities to host a community iftar event. Each evening, just before the sun goes down, there’s a definite air of excitement as people get ready for iftar and then share their meals with family and friends.  As a traveller, it is impossible to miss this excitement. 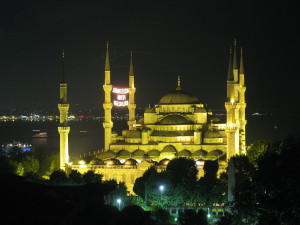 Visitors to Turkey during Ramazan will enjoy the festive atmosphere – especially in Sultanahmet (Istanbul Old City) where the Blue Mosque is lit up with festive lighting, and the Hippodrome is filled with food, religious and craft stalls.  Many Istanbulites will try to celebrate an iftar meal in Sultanahmet Park which is nestled between the Blue Mosque and Aya Sofya, and so this area is buzzing with happy, picnicking families.  In many areas you may see communities joining together for iftar dinner out on the streets and in parks at long trestle tables – don’t be surprised if you are asked to join in!

In “touristy” areas, restaurants will be open for business as usual.  In more conservative towns there will still be restaurants open for people who are not fasting, although sometimes they might have some reduced hours due to less business.  In really conservative areas, such as in the East, you might see some restaurants with blacked out or curtained windows.  This is done in order to be sensitive to those who are passing by and are fasting.  In more conservative areas some restaurants may decide not to serve alcohol during Ramazan, but this is less likely to be the case in most of the towns on a typical tourist route around Turkey. If you are thinking of going to dinner at a restaurant that provides an iftar menu, then you might need to make a reservation.

Turkish people understand that non-Muslim tourists won’t be fasting, and you will find that you will be served with a smile.  If you come across a restaurant where most people are dining inside, follow their lead and dine inside also as a sign of respect to those fasting.

The most important thing you need to think about if you are travelling during this time is bus and plane travel.  Just before the end of Ramazan, many people will start to travel to their home towns for Şeker Bayram (Sugar Festival) celebrations, and so buses and planes fill up quickly, traffic gets congested, and prices of flight tickets in particular can sky rocket.  Make sure you book any domestic flights before you leave home.  It can be difficult to book bus tickets in Turkey from overseas as most bus company websites are in Turkish, so it is a good idea to see if you can find a Turkish travel agent to help you with this.  Or, make sure you book your tickets as soon as you arrive in Turkey to make sure you don’t miss a seat.

Şeker Bayram also brings with it, a great atmosphere as people enjoy heading home to spend time with family.  During  Şeker Bayram it is customary for children to dress in new clothes given to them by their parents, and to go from house to house or to businesses asking for “sugar” (a sweet treat).  And new clothes are not just for the kids – it is very common for adults to be spotted sporting suspiciously shiny shoes and new threads as well.

So, as long as you do a bit of planning and make sure that you have your bus and flight tickets booked in advance if you are likely to be travelling in the days before, during and after Şeker Bayram, you should have a happy Ramazan travel experience.