Religious Signs and Symbols in Ephesus

Turkey has long been a place where different faiths converge.  There are several religious signs and symbols in Ephesus which give us subtle clues to its rich history as a homeland to these faiths – in particular, Christianity and Judaism.

We know that Jewish people have lived in Turkey for thousands of years, and that at the time St Paul came to Ephesus, there had been a Jewish community numbering around 10,000 people for around 300 years. The Book of Acts refers to Ephesus’ Jewish community and synagogue.

In Hellenistic times, Jewish people were granted citizenship and were exempt from military service in accordance with their beliefs.  In short, the Romans were fairly tolerant of people from different religions as long as they paid their taxes and did not cause any trouble for the Empire.

It is believed that the Jewish synagogue in Ephesus is located in the area behind the Celsus library, however this has not yet been excavated.  There is also an inscription in Ephesus’ Church of Mary which suggests there was a synagogue close by.  A glass bottle with a seven-branched candlestick (menorah) was also found near here which supports this theory. 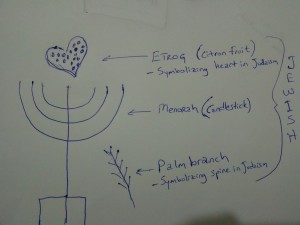 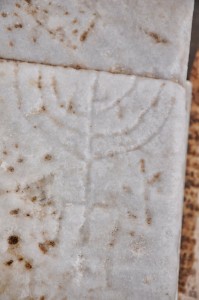 The etrog (a citrus fruit similar to a lemon), the menorah and the lulav (palm branch) have long been important symbols in Judaism.  The menorah is a seven-branch candleabra used in the Temple, and a symbol of wisdom guided by light.  In Judaism both the lulav and the etrog are used in some rituals during the festival of Sukkot.  The etrog is said to represent the heart because of its shape and the appearance of its seeds inside, when cut, while the lulav represents the spine. In ancient times they were most likely used as a means of identifying fellow Jews, and also as a symbol of community in a sometimes hostile world.

In Ephesus there is a carving on the portico of the Celsus Library which features a menorah, with a very small etrog to its left, and although it is very difficult to see, in the bottom right part of this carving there is also a lulav (palm branch). 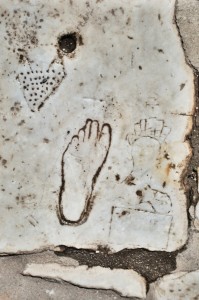 A second etrog carving can be seen close to the left of the famous carving of a footprint in Ephesus.   These two carvings confirm and highlight the Jewish presence in Ephesus.  The purpose of the carving of the menorah, etrog and lulav in front of the library is the subject of much debate – some believe that it may have been carved in protest of either the worship of Artemis or the efforts to convert the Jewish community to Christians.  Others believe it was carved as a symbol of community and to identify fellow Jews, however, its exact meaning is not widely agreed on. Together, this carving, along with the second etrog carving are important, because they are some of the few archaeological clues that we have about this community until such time as the synagogue is excavated. 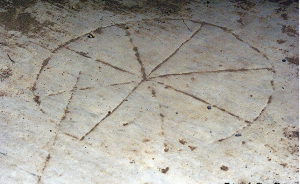 There are some also important Christian symbols in Ephesus.  One of them relates to the Christian fish, sometimes referred to as the “Jesus Fish”.  We know that fish have symbolic meanings in many areas of Christianity. Many of the Apostles were fisherman, and fish were mentioned many times in the Gospels, most famously when Jesus multiplied loaves and fish to feed the masses.  The fish continues to be a symbol for Christians today. 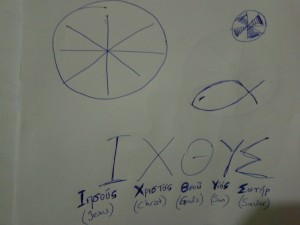 It is believed that in ancient times, when persecution of Christians was ongoing, when meeting in a public place, one person would draw an arc in the dust, and if the second person was also a Christian, they would complete the drawing by adding the second arc to form the Christian fish symbol (see drawing on the left).

In Ephesus, there is an important Christian symbol, sometimes referred to as the “Christian wheel” which is believed to precede the symbol of the fish as a secret symbol of those who were Christian. Variations of it can be found in several locations throughout Ephesus.  It consists of the ancient Greek letters, IXOYE, which spell the word “Ichthys”, which was the word for “fish”.  In the Christian wheel, these letters are superimposed into the wheel, and to a casual observer, it just looks like a wheel with eight spokes.  For early Christians this symbol had a deeper meaning, as the letters themselves also symbolised the phrase “Jesus Christ God’s Son Saviour”.

Iota – first letter of the name Jesus in the Greek alphabet.

O – the first letter for the Greek term for God.

It’s important to remember that the early Christians faced persecution and torture because of their faith, and so non-verbal forms of communication, such as this symbol of the fish were used to identify believers and also carved into marble to show the path to safe homes for those being persecuted. They were a critical survival tool.