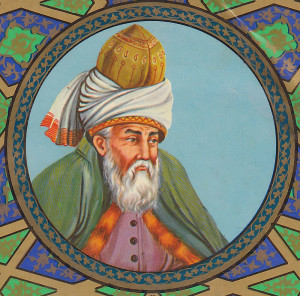 Jalāl ad-Dīn Muḥammad Balkhī, (in Turkey referred to as Celâleddin Muhammed Rûmi), often referred to simply as Mevlana or Rumi was a 13th Century Sufi mystic and poet.  All over the world he is a highly respected spiritual master, and respected by people of many faiths.  He was born in Afghanistan, but eventually migrated to Konya, Turkey where he lived for the last 50 years of his life.

He is so revered around the world that the United Nations declared 2007 as the Year of Rumi – 6 September 2007 would have been the 800th anniversary of his birth.

His father was a respected Islamic teacher and theologian, and following his death, Rumi took over his father’s position.  During his time in Konya he met Shams of Tabriz (Şems-i-Tebrizi, in Turkish) who was a wandering dervish. Rumi and Shams formed an incredibly close friendship which is said to have changed Rumi’s life.  However the influence that Shams had on Rumi was resented by many, and it is alleged that some of Rumi’s students killed Shams in Damascus.  It is broadly acknowledged that Shams’ death was the catalyst for Rumi to start writing poetry as a way of expressing his grief. His masterwork is the Masnavi, a six volume work of spiritual poetry.

He died on 17 December 1273, and a beautiful masoleum was built which houses the body of Rumi and and his father.  This is a site for more than 1.5 million pilgrims of many faiths who visit it each year.

While Rumi was Muslim, he was not an orthodox Muslim and he preached unlimited tolerance for all beliefs.  His works have been translated into many different languages and are loved by people all over the world. To this day, he is the best selling poet in the United States. Rumi’s attitude towards people of other faiths are probably best expressed in this famous verse:

Come, come, whoever you are, come.
Infidel, idolator, Wanderer,  fire-worshipper, it doesn’t matter, come.
Ours is not a convent of despair.
Come, even if you have broken your vow a hundred times,
Come, come again

And the respect that Rumi had for people of other faiths is returned – in 1958 Pope John XXIII famously wrote “In the name of the Catholic World, I bow with respect before the memory of Rumi”. 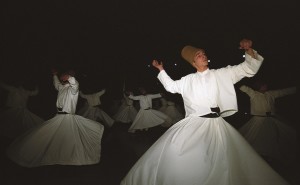 Whirling Dervishes are actually members of the Mevlevi Order of Sufism.  The order was founded by followers of Rumi after his death. Whirling dervishes perform a ceremony called Sema which is said to represent the spiritual ascent through mind and love to a state of perfection and union with the divine. It is performed with one hand up to signify accepting the love of God, and the other hand down to connect with God’s creation.  The Sema ceremony has been listed by UNESCO on its Masterpieces of the Oral and Intangible Heritage of Humanity list.  It was actually Rumi who first performed the Sema, and legend has it that  one day he felt compelled to stretch out his arms and spin in a circle after hearing rhythmic hammering of Goldsmiths and it sounded like “la elaha ella’llah” in Arabic (There is no god but Allah (The God). And so, the practice of Sema was born.

When performing the Sema, the dervishes whirl around their sheikh, who whirls around on the spot. Dervishes spin on their left foot, and wear a white gown which symbolises death, the sheikh wears a black cloak (symbol of the grave) and a tall brown hat made of felt which symbolises the tombstone.

While dervishes are usually male, throughout history there have been female dervishes, some of whom have attained high positions within the order. 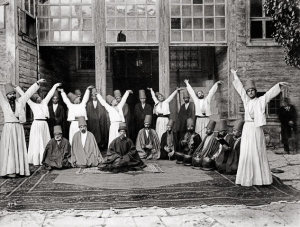 Photograph of dervishes in Galata, Istanbul dating back to Ottoman times

The Mevlevi order was well recognised by the Ottoman Sultans, and during their reign Sufism spread to other countries, including the Balkans, Egypt, Lebanon, Syria and Jerusalem.  However, the Mevlevi order was outlawed in Turkey in September 1925 under the new Turkish Republic, although it is believed they continued to practice for themselves.  In 1954 they were given partial rights to perform, partly for tourism reasons, and they began to travel the world performing, and even performed for Pope John Paul VI.

The Mevlevi order continues to be active today, and is lead by the 20th great grandson of Rumi.

Every year between 10- 17 December, (the 17th being the anniversary of Rumi’s death), the Mevlevi dervishes perform as part of a religious festival in Konya. This attracts tens of thousands of pilgrims from all around the world.

If you can’t make it to Konya in December, then you can also see the dervishes perform in Istanbul at the Galata Mevlevi Lodge.