The hamam (Turkish bath) has long played a role in Turkish culture and history, and no trip to Turkey is complete without a trip to a hamam.   A descendent of Roman and Byzantine baths, in Ottoman times the hamam was not just a place for cleansing both body and soul. It also served as a place for social and even business gatherings, and, in the case of some of the bigger hamams, was a way for the Sultan to show off his wealth and architectural might. Particularly in Istanbul, no expense was spared in constructing and decorating some of the larger hamams which had ornate tile work, lots of marble and high domes with skylights. 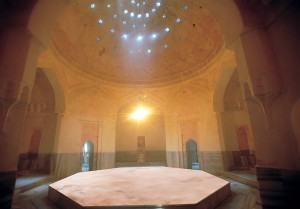 Traditionally, men and women bathe separately in a hamam.  In the beginning, they were primarily the domain of men, and would often have one day a week reserved for women if the hamam was not built with separate men’s and women’s bathing areas. A trip to the hamam was a particularly important part of social rituals for Ottoman women and often was also a way of brokering marriages and checking out potential future daughters-in-law.   Ottoman women would often have a gathering of their female friends and family at the hamam and henna her hair prior to her wedding day. Even women wealthy enough to have a personal hamam at home would spend at least one day a month at the hamam so as not to miss news and the chance for socialising with friends.  In some cases a hamam trip could be almost a full day affair, and would include food, music and possibly even dancing.  In fact, going to the hamam was so important for women back then, that if a women did not receive her allowance from her husband to go to the hamam it was actually recognised grounds for requesting a divorce!

While modern-day plumbing has changed the habits of Turkish people in regards to attendance at baths, today, many locals will still put time aside to regularly visit a hamam. The tradition of  groups of women attending the hamam together as part of pre-wedding preparations has had a revival in recent years, and so now it is common to see pre-wedding groups at the hamam, sometimes even with a musician in tow, just as it was back in the day.

Most towns in Turkey have a hamam, although in less-touristy areas there may be specific times for men and women to visit, so it pays to check before you go. In Istanbul, the large hamams have separate men’s and women’s sections so just turning up is no problem. In some more touristic areas there may be a mixed hamam, so wearing a swimsuit is essential. If it is a segregated hamam you’ll be able to strip down to less in order to get maximum cleansing effect. But a word of warning – they can get very busy from about 4pm as tourists flock to the hamam to scrub away traveller’s grime after a day of sightseeing – so try to schedule your visit for earlier in the day, before lunch if possible.

Most hamams have several chambers of varying temperatures – a hot room, a warm room, and a cold room. The main chamber has a big marble slab (usually round) which is where all of the scrubbing action will take place.

When you arrive you will be given a cotton wrap called a peştemal (pronounced PESH-teh-mal), some rubber slippers, and a keşe (scrubbing mitt).  Once you’ve stripped down to your underwear or swimsuit and wrapped up in the pestemal and put your slippers on, you’re ready to enter the hot room where you will lie on the marble slab to steam in preparation for your scrub down by the hamam attendant.  First you will be scrubbed from head to toe using the keşe, then next you will be washed again, this time using luxuriously foamy olive oil soap.

The ritual of hamam bathing is not to be rushed, and incredibly luscious, making our daily showers pale in comparison.  Although it may at first seem intimidating, don’t miss out on the chance to visit a hamam when you visit Turkey – it’s an experience to remember.