1.  Baklava – Consisting of paper-thin layers of phyllo pastry filled with a spicy, sugary mixture of nuts such as walnuts and pistachios, topped with melted shortening, then drizzled in a sweet syrup of honey and cinnamon, baklava was considered a dessert only for the wealthy prior to the mid 19th century.  In Ottoman times it was a dessert of choice because some of the key ingredients – pistachios, honey, cinnamon and cardamon were considered to be aphrodisiacs.

Today, it is one of the most contentious desserts because of endless debate about its origins – did it come to Turkey first or Greece? Or does it come from the Middle East?  Is it a fresh take on the old Byzantine dessert called kopti which is made up of ground nuts, sesame seeds and honey encased in two thin layers of dough? Or perhaps an improvement on a dessert made by nomadic people in Turkey who used to make super thin layers of dough and place things between it? One of the most popular theories is that it may have migrated to Turkey from Iran along the migratory route between Iran and Turkey.  It is also often touted as having Assyrian origins.

The version of baklava in Turkey today is most likely a result of recipes perfected in the Ottoman palace kitchens.  In Ottoman times the sultan used to present trays of baklava to his janissaries on the 15th day of Ramadan each year in a special procession called the Baklava Alayi.

How to spot a good baklava?  It should look shiny and golden, and when you put a fork into it, you should hear a soft crackling sound and you should be able to smell the ingredients as you put it into your mouth.  The thinner the pastry, the better made it is. 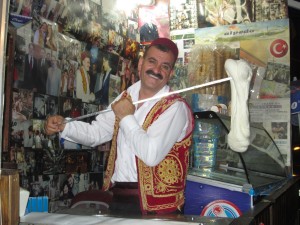 2.  Kahraman Maraş (pronounced “Mahr-ASH”) Icecream, or Maraş Dondurma (Icecream) as it is known in Turkey is icecream like you have never tasted before.  As you travel throughout Turkey you will see men, usually dressed in a jaunty waistcoat and fez hat putting on quite a show as they serve it up to customers on long handled paddles and “teasing” the customers as they give it to them. You will also see them regularly churning or mixing it to keep its texture pliable.  Regular Turkish icecream is made with goat’s milk and thickened with salep, a type of flour made from the root of the early purple orchid and mastic, a resin that makes it chewy.  Maraş icecream has more salep than regular Turkish icecream which makes it so chewy that it is often eaten with a knife and fork.

3.  Künefe (kooh-neh-FE)- hailing from Turkey’s south eastern region, cooked to perfect in Antakya, no visit to Turkey is complete without trying künefe .  And once you try it, you’ll be hooked.  It’s a Levantine cheese pastry soaked in syrup.  Variations of this dish can be found in Lebanon, Jordan, Syria and Egypt.  The pastry is heated in butter or margarine, spread with soft white cheese then topped with pastry strands made by pushing the pastry through a sieve, then drizzled in a sugary syrup. It’s served hot with clotted cream with ground pistachios sprinkled on top.  When you eat it, the hot cheese oozes out, providing a delicious contrast to the gooey syrup. The result is a divine sweet treat with a savoury edge.  We promise you once you’ve tried it once you’ll be back for more.  We recommend trying the incredible künefe made at the legendary Hafiz Mustafa dessert shop in Sirkeci in Istanbul – it’s on the corner just near the Sirkeci tram station – you can’t fail to find it. 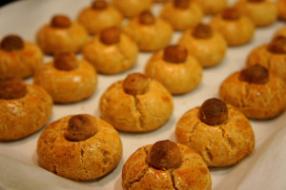 4.  Şekerpare – (shek-EHR par-EH) it’s name translates to “a piece of sweetness”, and that’s exactly what it is.  One of the simplest and most popular Turkish desserts, şekerpare is essentially little balls of pastry made from semolina and flour covered in a sugary syrup flavoured with lemon.  It’s a staple dessert in every Turkish household and it’s easily found in bakeries and sweet shops all over the country.

5.  Kestane Şekeri (kes-tahn-EH’ sheh-keyr-EE’) – if you happen to be travelling through Bursa, you simply have to stop and try the local sweet 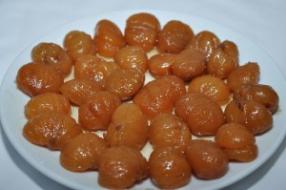 specialty – kestane sekeri, or candied chestnuts, which has been perfected for hundreds of years – ever since Bursa was the capital of the Ottoman Empire.  In fact Bursa’s kestane sekeri is so darn good that it is exported to more than 70 countries around the world.  One of the reasons for this is that Bursa is home to some of Turkey’s fattest and juiciest chestnuts which gives Bursa a big advantage in preparing this delicacy.  Turkish travellers passing through Bursa will stock up on boxes of it to give to people back home as a gift.