Zeugma is an ancient city of the Commagene Kingdom, located in what is today the province of Gaziantep in Turkey and dates back to the 3-4th century B.C..  It was established by Seleucus Nicator I, one of Alexander the Great’s commanding generals. Back then it was called Seleucia, and it was on the western side of the river. He established a second settlement on the eastern side of the river, naming it Apamea after his Persian-born wife.  The two cities were connected by a bridge.  Later after being conquered by the Romans it was renamed Zeugma which means ‘bridge’ or ‘crossing place’.

Because of its location on an east-west axis on the Euphrates River, it quickly developed and became prosperous and an important commercial, military and religious centre.  This was a place where trade and political routes converged, and was also important because it was the last stop in the Greco-Roman Empire before people crossed over to the Persian Empire. It is estimated that at the peak of its prosperity it had a population of 70-80,000 people. To give you some perspective, this is twice the size of London and three times the size of Pompeii in the same period. It attracted a lot of wealth and artists, and many of the locals built villas on the banks of the Euphrates, most likely to take advantage of the beautiful sunset views this position gave them.  They built the villas heavily utilising mosaics, especially as paving for pools.

Sadly it was attacked by the Persian Sassanids  in a.d. 253, resulting in the destruction of its luxurious villas. The city was taken over by rural people who were not wealthy and used only basic building materials.  The city was later destroyed by an earthquake which lead to it becoming completely abandoned.

Over the years Zeugma has been the site of some drama and excitement. 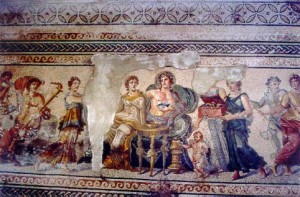 In 1992 a guard of the site discovered a tunnel which had been dug by looters which lead to the remains of a Roman villa and some incredible mosaic pavements.  The villa had a number of galleries around an atrium behind columns.  In one of the galleries, archaeologists discovered a mosaic of the wedding of Dionysus and Ariadne – it depicts gods and goddesses, some scantily clad, drinking accompanied by music. They restored it and decided to leave it in place, only for two thirds of it to be cut out and taken by looters in 1998 – it is still missing. The remains of the mosaic are on display in the Gaziantep Mosaic museum as a reminder of the loss to society as the result of looting and illegal trafficking of artefacts.  There is a photograph of the missing portion of the mosaic projected onto the mosaic in the hope that someone will recognise it and alert the authorities. 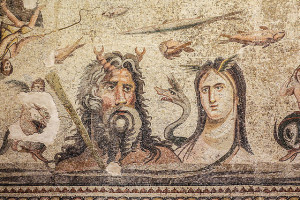 “The Oceanus and Tethys Mosaic” by Bernard Gagnon – Own work. Licensed under CC BY-SA 3.0 via Wikimedia Commons

During one stage of the excavations it attracted world wide media attention because construction of the nearby Birecik Dam resulted in flooding of the area – flood waters rose around four inches each day for six months, threatening to engulf the remains that had not yet been excavated.  The resulting media attention resulted in lots of aid from the public and private sector from around the world, and assistance from some of the world’s top mosaic restorers who arrived from Italy to assist with rescuing the mosaics from the floodwaters.

In September 2011 the very modern Zeugma Mosaic Museum opened in Gaziantep and attracts large numbers of international tourists.  It is the largest museum of its type in the world and houses 2,464 square metres of Zeugma mosaics as well as fountains, status, frescoes, steles and columns that have been recovered from the site. The mosaics of zeugma provide us with important clues about the culture that prevailed in Zeugma as well as the beliefs of its people. Some of the treasures that have been discovered are on display include:

Zeugma mosaic museum has put the city of Gaziantep firmly on the map, and is well worth a visit when in Turkey.