A Quiet Mathematical Revolution Near Ephesus

Located on 13.5 acres of land just 800m from Sirince Village lies what started out as a unique experiment – Nesin Mathematics Village. Set in tranquil, green surrounds on a hillside, its buildings are simple – made from stone, clay and straw, yet very charming and welcoming.

The village was established in 2007 by Ali Nesin, Director of the Nesin Foundation which was founded by his father, well known leftist writer, Aziz Nesin. The foundation was originally established by Aziz Nesin using profits from his books to provide financial and other support for students from disadvantaged backgrounds to finish their education. The village brings to life Aziz Nesin’s request in his will that a mathematics institute be established in his name, and was built entirely with the support of donations and largely with volunteer labour.

At the time of his father’s death in 1995, Ali Nesin was head of the Mathematics Department of Istanbul’s then newly established Bilgi University. He was discovering a gap between high school graduates’ mathematical skills and those required for the university’s demanding first year mathematics program, and so organised a series of summer camps to help his students grow their mathematical ability.  However the camps were logistically difficult and expensive to run.  He bought a plot of land on the site where the school now stands and commenced construction with design assistance from his friend who owned a nearby boutique hotel.  The summer of 2007 saw the very first summer camp, mainly of Bilgi University students, with most students and lecturers camping out and helping with construction in addition to attending lectures.

Today, volunteer mathematicians from all over the world teach students both young and old in a communal atmosphere free from the distractions of radio, television or music (although comforts such as wi-fi and hot water exist). Students are required to assist by undertaking the day to day chores around the village. They are also encouraged to undertake self-directed learning and solve problems together in groups.

The establishment of the village also dovetails nicely with the original work of the Nesin Foundation in helping disadvantaged students complete high school and university – the Nesin Mathematics Village has an unwavering philosophy that nobody will be refused entry because of financial issues which is of huge benefit to some of the students who may not be able to afford the 60-80TL per day to attend the village.  These days the village has opened up its facilities to high school students as well as university students, with the high school camps in particular being hugely popular. 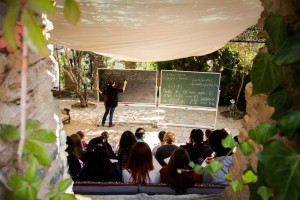 The philosophy behind the village’s establishment is that every person has more or less the same mathematical ability, and it is simply negative learning experiences and fear of failure get in the way of success at mathematics. The village’s physical layout has been styled on medieval monasteries and madressas with the sole aim of creating an environment that encourages creativity and learning. For example, a blackboard is located in the courtyard, encouraging students to use it to solve problems together in an informal environment.  Hammocks, swings and couches are dotted around the public areas. 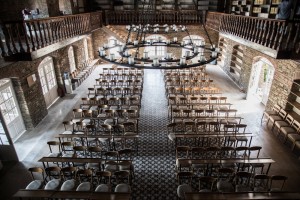 Today it has expanded to include dormitory accommodation for 169 people, two amphitheatres, two indoor and two outdoor lecture theatres, 29 private rooms, a small shop, a cafeteria and a library.  Every summer demand for places generally outstrips available accommodation and so it is still very common to see students camping.  Research groups, including groups of renown mathematicians gather here to collaborate on their research projects in peaceful surroundings.

The village has plans for more expansion of their accommodation, and plans are underway for a philosophy village. The village is a great initiative and is always in need of volunteers and donations of money and books for their library.  To find out more about how you can help, see here.

If you are interested in doing a tour of Sirince, have a look at my Sirince Tour