In ancient times, citizens passed through the streets on foot or on an animal, and so they passed through much more slowly than we pass through our streets today.  And, most likely for this reason, streets of most ancient cities were full of signs and symbols, something that we do not see in modern times.

In Ephesus, there are two interesting symbols which could be missed as you walk down from the Agora to Curetes Street. On either side of the street, at the beginning of what would have been a small road back in the day,  is a rectangular plinth (pedestal usually made of stone or marble and often decorated with a bas-relief).  Each of them is decorated on the front with a bas-relief of Apollo’s tripod, and on the side, with a relief of the god Hermes, leading a ram.  This road was part of the processional way that went from the Temple of Artemis to the city of Ephesus. 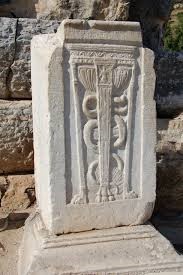 In ancient times, a tripod was used as a stand during religious or ritualistic ceremonies.  In classical Greek times, the Delphic tripod was the most famous of all, as it was on here that a priestess sat to deliver her oracles.  This tripod became sacred to Apollo, brother of Artemis, the patron deity of Ephesus.  Apollo’s tripod is the subject of the myth depicted in vase paintings older than the first written word which see Heracles and Apollo struggling for the tripod.  The plinth depicting Apollo’s tripod at Ephesus depicts the omphalos between the feet of the tripod. The omphalos is a stone artefact, which according to Greek mythology, was used to mark the “navel” or centre of the world” after Zeus sent two eagles out to meet at its centre. There is an omphalos at the Temple of Apollo in Delphi.  The omphalos is also said to symbolise power.

Because Apollo’s tripod is a symbol of purity, healing and power, it’s placement here gives us a clue that the processional way passes through here, as well as a clue about what this road is used for. 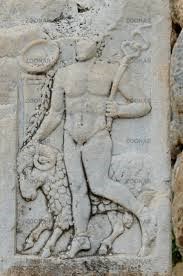 The bas-relief of Hermes shows him as a naked, athletic youth, walking with a ram, and carrying his staff which is wrapped with two snakes which he used to induce sleep and healing.  Hermes was the messenger god, carrying news between gods and goddesses.  He was also responsible for carrying souls to the afterlife.

Along the processional way there were many monumental tombs, and so the use of the Hermes bas-relief here which symbolises life and death, is likely to be giving a clue to this.