Silk Road caravanserais and the road known as the old Silk Road on which they are built, are still shrouded in mystery and romance today.  In Turkish, the Silk Road is known as the Uzun Yol (Long Road).  This ancient trade route of caravan trails once connected Turkey, Persia (Iran), India & China, and played a major role in growing the trade between countries.  We can probably thank Alexander the Great for its creation, and it was further developed by the Roman Byzantine Empires.  Unfortunately it started to decline as maritime routes between the East and Europe opened up in the latter part of the Ottoman Empire.

The Byzantines highly valued the treasures that came from the east, and so they did a lot to improve the roads on the western part of the route.  However the road really grew and flourished under the Seljuk Turks who built the majority of the Hans and Caravanserais on the route.  There are almost one hundred caravanserais along the Silk Road in former Seljuk territories.

The word “Caravanserai” is the Western spin put on an old Persian word, which means dwelling, place or enclosed court – in Turkish, the word we use is kervansaray.

Caravanserais were always connected to a religious organisation and so had a charitable aspect to them. Under this ancient system, traders travelling along the Silk Road could stay at a caravanserai for up to three days free of charge. This included provisions for the traders and their animals.

The easiest way to conceptualise the caravanserai is to think of it like ancient truck stop, but minus the trucks. It was too dangerous for the traders to sleep by the side of the road because of the risk of highway robbery, and so the caravanserais gave them a safe place to sleep for the night. They were usually located around 30-40km apart, which is the length of a one day trek with an animal.

The facilities provided at the caravanserai – food, a tea house, a bath house, a farrier, and accommodation for traders and animals alike, cut down on the need for the traders to load up their animals with gear for camping, sleeping and cooking, and so they could carry more of their goods.  In short, it was a win win situation for everyone. 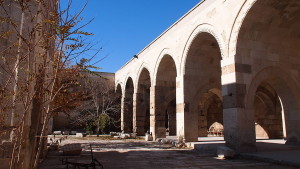 Caravanserais were either square or rectangular in shape, with a courtyard in the middle.  It would be surrounded by high, fortress style walls, and one entrance would be extra wide and high in order to allow the heavily loaded animals to enter.

Inside, the courtyard would be open to the sky. Other services provided at each caravanserai included a veterinarian, a small mosque or prayer room (usually located in the centre), shops selling supplies, shoe repairers etc.

In Turkey, the Seljuks built around 250 caravanserais.  In addition to those built on the old Silk Road, which cuts across the middle of Turkey, there are a number of others found on the roads from the Balkans to Istanbul, and from Antalya to the Black Sea Coast city of Trabzon. 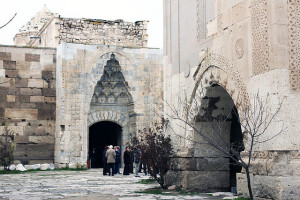 One of the most famous caravanserais in Turkey is Sultanhani Caravanserai, which was built in 1229.  Located between Konya and Cappadocia, it is still intact, and as you approach its 15m walls, it is easy to imagine what a relief it was for dusty travellers after a day of travelling across the Anatolian plains.

Spread out over an area of 4990m2, Sultanhani Caravanserai is the biggest and the most decorative of the caravanserais in Anatolia and is probably the best example of the Seljuk form of stone masonry.

If you are visiting Turkey, particularly the Konya or Cappadocia areas, I highly recommend you try to visit Sultanhani or another caravanserai.  If you are interested in discussing an itinerary, contact me for more information.