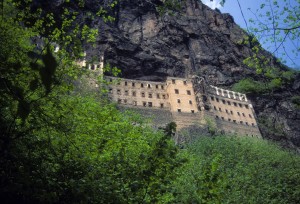 Located 46km south of Trabzon in Turkey’s Black Sea region, Sumela Monastery sits dramatically in the side of a cliff and is a must-see if you are visiting the area.  Once upon a time it was a popular destination for Christian and Muslim pilgrims, however today it is primarily a tourist attraction.

It is said to have been found by two priests from Athens named Barnabus and Sophronius during the reign of Theodosius I (375-395).  They were on their way from Athens to Trabzon, and legend has it that, having been guided to the location by the Virgin Mary, they found an icon of Virgin Mary in a cave on a mountain and so they built a church to house it.  This church is still there today and is at the centre of the monastery. But how did the icon get into the cave in the first place?  Legend is that the the icon was actually painted by St Luke, and was sent to Athens after he died.  The icon didn’t want to stay in Athens, so was carried to Trabzon by angels and placed in the cave.

The icon in question is known as the Panagia Gorgoepikoos, and is so dark that it is nearly black.  In the 12th century there were a number of similar icons, known as “Black Madonnas”. The Black Madonnas were either paintings or statues and depicted Mary with dark skin. They were found in places of worship and also in elevated positions close to healing springs across Eastern Europe.

Eventually a monastery was established on the site and the monks of Sumela travelled around Anatolia, the Balkans and Russia selling copies of the icon to fund the running of the monastery.

The walls of Sumela Monastery has many stories to tell.  It has been ruined and then restored several times.  The present form of the monastery dates back to the 13th Century having been richly stored as a thank you from the very young Emperor Alexios III who was apparently saved from a storm by the Virgin Mary. He also gave it an imperial grant which was continued by his successors. When Sultan Mehmed II conquered Trabzon in 1461 it was granted special protection and rights which were respected by the Sultans who followed him.

Sumela also has an interesting modern history.  It was taken by the Russian Empire just last century, during their occupation of Trabzon between 1916 and 1918.  Sadly, it was abandoned when the population exchange between Greece and Turkey took place in 1923, and the Greek monks who lived there were forced to return to Greece and not allowed to take anything with them.  It is understood that at this time they hid the icon in the monastery’s chapel floor then one of them secretly came back to Turkey in 1930 to retrieve it. Today the icon lives in the New Panagia Soumela Monastery on Mount Vermion in Greece. 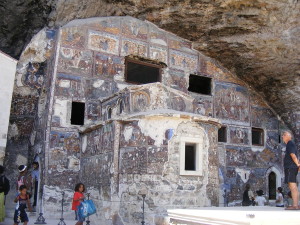 The climb to the monastery will take around half an hour and is on a steep path through an alpine forest.  However, it is definitely worth the visit. You’ll be amazed at the architectural and masonry talent that went into building the monastery.  It is mind boggling to think about how the monastery was built at such a height and in such a tricky location.  Once you are inside the complex you’ll see several chapels, kitchens, student rooms, a library, a rock church, and a sacred spring which was very important for Orthodox Christians.  The rock church is particularly worth a mention in that it is very unusual because its outside as well as its inside is decorated with frescoes.

It is open every day of the year, however on 15 August each year you will need special permission to visit as a Greek Orthodox service is held on this day for the Feast of the Assumption.  This attracts around 1000 visitors, with those who were not lucky enough to be one of the 300 people allowed to enter the monastery to attend the service watching the service on widescreen televisions at a nearby cafe.