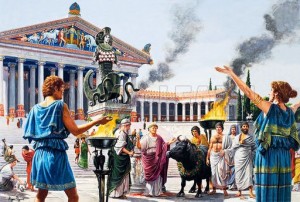 The Mother Goddess Artemis was extremely popular in the ancient world, and was recognised in many Greek cities as a secondary deity.  However, for the Ephesians, she was a prominent deity, and so they built a Temple of Artemis in her honour.  Its size and beauty were such that it was recognised as one of the Seven Wonders of the Ancient World.  It was a popular destinations for pilgrims who donated jewellery and other treasures, making the city very rich. It was also home to many fine artworks such as sculptures and paintings.

For the Ephesians, Artemis represented fertility unlike her Greek namesake Diana who was the Goddess of the hunt and signified virginity. Statues of Artemis appear to have many breasts, although some scholars claim that they represent the testes of the bulls sacrificed for her and represent fertility.

The temple was surrounded by priests and priestesses, musicians, dancers and acrobats who performed the ceremonies that took place here.

Throughout time, it is believed that the Temple of Artemis was rebuilt up to seven times, although the exact number is not agreed on.  Excavations have revealed evidence that it has been rebuilt at least three times.

The first Temple of Artemis is believed to have been built sometime around 800BC and destroyed either by flood or war.

Work on its second reconstruction commenced around 550 B.C.E. and was overseen by Chersiphron, a Cretan architect.  It was a huge structure – taking up the size of a football field, and was very ornate – built of marble, and with 36 of its columns decorated with reliefs.

In 356 BC the Temple of Artemis was destroyed in a ﬁre lit by Herostratus, who claimed he did it to be famous.  It is believed that he was unhappy because he had failed to achieve the respect and status in Ephesus that he craved, so he saw the fire as his chance to make sure his name went down in history.  Because of the extensive use of marble in the temple, he went to great lengths to get to the wooden furnishings inside the temple, to ensure that Temple of Artemis would be severely damaged.

Following the fire, the Ephesians began to construct a grander new Temple of Artemis.  During its construction, Alexander the Great arrived in Ephesus and offer to pay for the construction if the Ephesians would dedicate the temple to him.  However the Ephesians refused his offer.

This second version of the temple was destroyed in 263AD by Goths, and later rebuilt in the 4th Century, only to be abandoned.

Although there is just one lone column standing on the site today, its size gives a sense of how grand the temple must have been in its day.