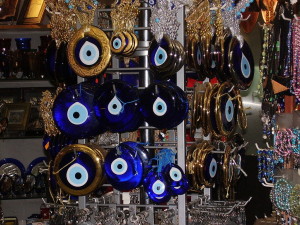 You’ll see them hung outside and inside homes, in cars, in shops, on bracelets, worn as earrings, on animals, and babies often wear one attached to a small safety pin – it’s the Nazar Boncuğu, which translates to the Evil Eye Bead, and often (incorrectly) called the “evil eye” – for in fact this bead is meant to ward off and protect you from the evil eye, rather than being an evil eye itself.

They are made from a mix of iron, copper, molten glass, water and salt – this combination, and when coloured blue is believed to protect you from evil looks by deflecting the negative energy away from you and dissipating it.The beads have the symbol of an eye worked into the design.

In Turkey, we believe that when someone is jealous of your good fortune, even subconsciously, then it can provide bad luck, pain or even an injury to you.  So the evil eye bead helps to protect you from this. 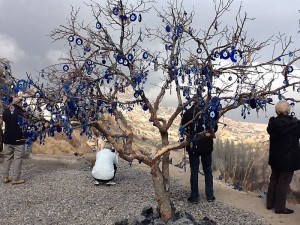 We are not alone in our belief – all over the world, there are similar types of talismans for warding off bad luck (think the rabbit’s foot), however a large number of religions and cultures also believe in the symbol of the eye as an amulet for protection and have their own take on it.

It is not clear where the belief in the protective powers of the colour blue originated from, but it is certainly a strong Mediterranean tradition, and this is why the front doors of houses in Mediterranean countries are painted blue – to ward off evil.
Here in Turkey, the idea is that an evil eye bead is attached to anything that might attract evil or jealousy – a new car or bus, a piece of new farm equipment, a new house, your baby, an office or yourself.  Sometimes an evil eye is even built into the foundations of buildings.

If your evil bead cracks, then it is believed that it has done its job of protecting you and you need to run out and buy a replacement post haste. 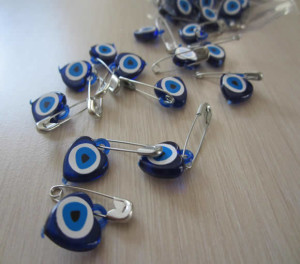 When shopping in Turkey, often times the shopkeeper will give you a small evil eye on a safety pin – don’t refuse it, because it is a very kind gesture.

And while you are shopping in Turkey, make sure you stock up on some evil eye beads of your own. So where can you get them?  Just about everywhere… tourist shops, bazaars, roadside vendors, in fact it will be difficult to travel around Turkey without seeing them for sale.  They make a great souvenir or gift, and with such a nice story attached to them, who could resist?