Turkey is one of the World’s top 5 producers of olive oil, with the area around Ephesus, and up the Aegean coastline being one of its major production areas.  It is estimated that approximately 76% of Turkey’s olive trees are located in the Aegean region.  Olive trees, their fruit and olive oil have been of major importance in the Aegean region since ancient times.  The famous Greek poet Homer gives us a clue to just how important they were, referring to olive oil as “liquid gold”. 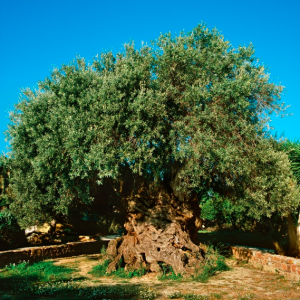 It is believed that olives were grown commercially as far back as 3000 BC on the Greek island of Crete, and today you can find the world’s oldest olive tree there, dating back to 1000BC.

The olive tree has been the subject of many myths and legends.  One of the best known relates to the olive tree and the founding of Rome.  There are two versions of this legend – in the first, Zeus had declared that the city now known as Athens would be given to whichever god offered the most useful gift to the people. Poseidon, the god of seas and Athena, the goddess of wisdom and skill went to the Acropolis to compete for this. Poseidon presented them with a horse, whilst Athena struck the ground with her spear resulting in an olive tree springing up.  Zeus declared Athena the winner and named the city Athens after her.

In the second version of this legend, King Cecrops of Athens was searching for a patron deity for the city of Athens. Poseidon competed first, and brought his trident (large three-pointed spear) down into the ground causing a spring of water to bubble forth, eventually becoming a sea, whose salty water was not appreciated by the citizens.  Athena went next, and quietly buried  a stick in the ground which grew into an olive tree.  The Athenians were impressed by the thoughtfulness of this gift as it not only provided food, but a source of oil for lamps and for cooking. She was declared the winner of the competition and became the patron goddess of Athens and the protector of city, and of course, the city was named after her.  Today there is an olive tree in the place where this competition is said to have taken place, and it is said that all olive trees in Athens descended from Athena’s olive tree. 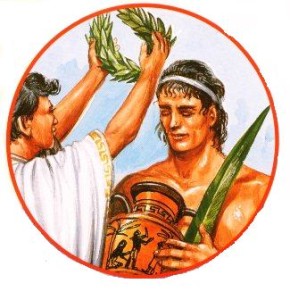 For the ancient Greeks and Romans, olive trees symbolised prosperity, glory, longevity and vitality, and so in ancient times they were regularly used in ritualistic ceremonies. They were also used to make crowns for winners of games and battles. Winners at the ancient Olympic Games were crowned with a wreath made from an olive tree branch that had been cut with a gold-handled knife because it was believed that the recipient would receive the vitality of the olive tree via the branch.

Olive oil was also used to anoint kings and athletes, as well as for burning in lamps and street lighting.  In addition, the father of modern medicine, Hippocrates listed a number of medical conditions that could be treated with olive oil, and referred to it as the “great healer”.  Ancient Greeks & Romans infused olive oil with herbs and aromatic oils to produce cosmetics and medicines.

Olive trees were considered so sacred that only young virgins were allowed to harvest olives, and in ancient Greece, sometime around 600BC, the statesman Solon even introduced legislation, Solon’s Olive Protection Law, which prohibited olive trees from being cut down or harmed in any way.

Ancient Ephesus was a major olive oil production centre – olive oil from here was sold to Athens and Rome.  Olive oil was a hot trade commodity in those days, and it was considered so valuable that the Romans often ordered populations they conquered to pay their taxes in olive oil as they were unable to produce enough olive trees to meet local demand – it has been estimated that adult citizens would have used around 55 litres of olive oil per person each year for person hygiene, consumption, in bath houses and as medicine.

Ephesus had some street lighting which was lit with olive oil – we know this because of an inscription that mentions about 40 lamps that were illuminating Arcadian Street into Ephesus.  Only the wealthier cities had lighting such as this in ancient times, and so this attests to the wealth that was present in Ephesus. 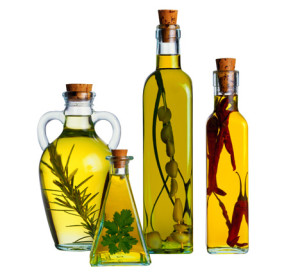 While Turkey has seen many different Empires and regimes come and go, the humble olive tree has continued to quietly thrive and retain its central role in both the nation’s diet and economy.