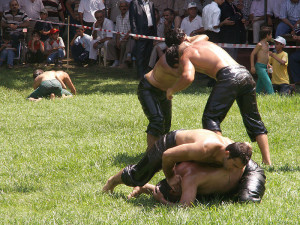 1. Kirkpinar Oil Wrestling Festival – this festival is held in July every year in Edirne and draws crowds of thousands.  The wrestlers (known as pehlivan in Turkish) wear traditional trousers made from cowhide (called kisbet) and wrestle, covered in olive oil.  This event has been categorised by UNESCO as an Intangible Heritage event, and is believed to be the longest standing annual sporting event in history.

The festival dates back to the 14th century and first began when a group of 40 Ottoman raiders began wrestling near what is modern day Edirne. Two of them wrestled though the night, and both died during the competition, with neither of them claiming victory.

2.  Hıdrellez festival starts on the night of 5 May and continues on 6 May in the Gregorian calendar.  Celebrated throughout the Turkic world and it is the day on which Prophets Hızır  (Al-Khidr) and Ilyas (Elijah) met on earth and also celebrates spring.  There are a number of rituals associated with preparation for Hıdrellez celebrations that many people still observe today.  These include cleaning the house and wearing new clothes and making wishes and saying prayers.  The night of the 5th is associated with rituals such as leaving purses and pantries open and conducting ceremonies to improve luck.  For example, young girls might gather in a green area or near water and put a personal item such as a bracelet or a ring in a pottery jar and put it at the bottom of a rose tree.  In the morning they will go to their jar and drink coffee with milk and pray for their peace and good fortune, then remove the object from the jar.  There are slight variations of this in different regions around the country, and often these days it is associated more with helping a single girl to find a husband. 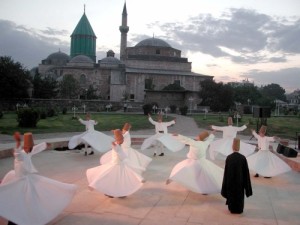 3.  Mevlana Festival, Konya – held from 10-17 December every year to honour the life and death of the famous Sufi mystic Rumi who was the inspiration for the establishment of the Mevlana order of Sufism, commonly referred to as “whirling dervishes”. He died on 17 December 1273, and so this date is referred to as his “wedding night” with God.  The whirling type dance performed by whirling dervishes is known as the Sema ceremony and represents the spiritual ascent through mind and love to a state of perfection and union with the divine. It is performed with one hand up to signify accepting the love of God, and the other hand down to connect with God’s creation.  The Sema ceremony has been listed by UNESCO on its Masterpieces of the Oral and Intangible Heritage of Humanity list. During the festival there are usually two performances of the Sema each day. The sight of the dervishes performing in the Mevlana Cultural Centre in Konya is awe inspiring and touching and a great experience for anyone who attends.

4. Nevruz (known as Nowruz in other parts of the world) is a spring festival originating from Persia.  In Turkey it is celebrated on slightly different days, depending on the region and their traditions.  It also has slightly different names in different regions.  The most common day for celebrating it in Turkey is 23 March. The day before, people will make preparations such as buying new clothes, cleaning their houses, and prepare food such as special pastries, roasted chickpeas and special breads for the next day.  All over Turkey there are different traditions and ceremonies performed for Nevruz, but essentially they all have the same theme – to ward off bad luck, and to bring good fortune and prosperity for the year ahead – prayers are said  and wishes are made.  In some parts of the country, on the morning of Nevruz (23 March), people will wake up early, put on their new clothes and go to local cemeteries and visit the graves there and drink a tea or coffee.  It is also traditional to visit your neighbours and relatives, and during the day people will come together for a meal, and in some areas musical instruments are played and folk songs are sung.

In Eastern Turkey, Nevruz celebrations are more prominent than in the West of Turkey.  Nevruz night is considered to be a sacred night, and it is believed that this night determines the fate and food of each person for the rest of the year. In some parts of the East, the head of a household will collect a small stone representing each person in the house and place them on the outside edge of the chimney.  The next morning, the stones are checked, and if one of them has a lady beetle on it, it is believed that this person will have good luck all year, and that this will be shared by family members.

In other parts of the country, Nevruz has a strong focus on the land, and the harvest, and it is believed that certain events (for example, a clap of thunder) during Nevruz and certain rituals will bring a good harvest.  All over the country, sharing a meal is a common factor, fires are often lit (and in places such as Edirne, jumped over) and there will usually be entertainment. Regardless of the way it is celebrated, the common factor is that Nevruz continues to be a significant cultural festival across Turkey. 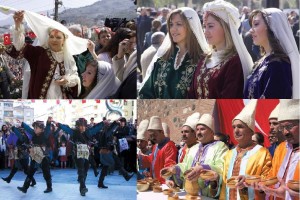 This festival celebrating and distributing Mesir paste is a tradition going back around 500 years in the city of the Turkish city of Manisa.  In Ottoman times Mesir paste was first made as a medicine for Ayse Hafsa Sultan, the mother of Ottoman Sultan, Suleyman the Magnificent.  She lived in Manisa, and fell very ill following the death of her husband. Doctors couldn’t find a cure for her, and so her son, Sultan Suleyman consulted with the head of a theological school in Manisa who was known for making medicines from herbs and spices.  The school head, Merkez Muslihiddin Efendi mixed together a paste made from 41 different types of spices and plants and sent it to the Sultan’s mother.

Miraculously, the paste worked and the Sultan’s mother fully recovered and told everyone about the paste and insisted that patients everywhere should be given the mesir paste.  There were so many people wanting the paste that Sultan Suleyman decided that it should be distributed to people via a festival on 21 March each year as this date symbolised the beginning of spring. The festival began sometime around 1527 – 1528, and people gathered in front of Manisa’s Sultan Mosque to catch parcels of the paste which were thrown from the rooftops and minarets of the mosque.  Although the tradition of mixing the paste took place this year on 21 March, the festival which also incorporates a folk dance festival was held between 21-26 April to allow people to celebrate in slightly warmer weather.  The festival showcases traditional Turkish folk dancing, and folk dancers from all over the world are invited to also perform at the festival.  The Mesir festival is considered so important that it has been placed on the UNESCO list of the Intangible Cultural Heritage of Humanity.